Lyophilization, evaporation or concentration: Which is best for my samples?

Lyophilization, vacuum evaporation and nitrogen blowdown evaporation are all methods to reduce sample volume; however, each method involves a different process and affects samples differently. It is important to identify which evaporation method is most appropriate for your sample in order to identify the right specific equipment to use.

Lyophilization, evaporation and concentration cause liquid or solid molecules to undergo phase changes, resulting in aqueous or solvent molecules leaving the sample as a vapor. The main force that drives the phase change is heat energy. The best evaporation method for a sample is mainly determined by how much heat the sample can withstand. 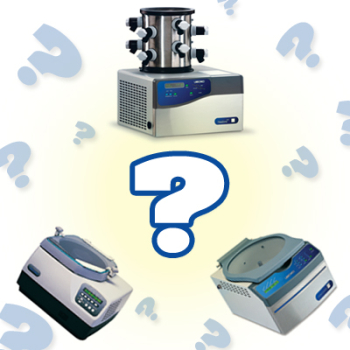 If a sample is not affected by heat, simply place the sample on a hot plate and let it boil until the sample volume is reduced to the desired level. Unfortunately, most samples are affected by heat, with biological samples being the most sensitive. In heat sensitive samples, the amount of heat driving the phase change must be limited or the sample will be damaged. When heat is limited, other forces must be used to drive molecules through the phase change instead.

Applying a vacuum atmosphere is a common technique used to force molecules through the phase change during evaporation or lyophilization. Boiling points of liquids are greatly reduced under vacuum, so phase changes occur at lower temperatures and less heat input is required. As a result, vacuum concentration or lyophilization are the most optimal methods for biological or heat sensitive samples.

Another technique that expedites the phase change of solvents is introducing a nitrogen stream at the surface of samples. The nitrogen stream disrupts the balance between the liquid and vapor phase and encourages the molecules to move into the vaporous phase. As a general rule, nitrogen blowdown evaporation requires a higher heat input than vacuum evaporation. Because of this, nitrogen blowdown evaporation is commonly used for volatile solvents or samples that are not damaged at moderate temperatures.

Lyophilizers use deep vacuum (< .200 mbar) and heat to remove moisture from a sample. The drying process, or phase change, in lyophilization is unique and is called sublimation. In sublimation, molecules go directly from the solid phase (ice) to a gaseous phase (vapor) without passing through the liquid phase.  Lyophilization requires a frozen sample.  If the sample’s freezing point is suppressed by the presence of solvents, the solvents should be removed with vacuum concentration prior to lyophilization so that the sample can then be frozen solid.

By circumventing the liquid phase in sublimation, the biological viability of many samples is preserved. This makes lyophilization a unique type of evaporation as it also preserves biological samples.

In vacuum concentration/evaporation, the sample is dried by converting liquid to vapor. Vacuum concentrators and evaporators take the liquid sample to 99% dryness in a relatively short amount of time and can accommodate most samples regardless of their freezing or boiling point.

In a vacuum concentrator, samples are held in a rotor that spins at 1700 RPM creating a centrifugal force.  The centrifugal force prevents liquids from bumping out of the tube when vacuum is applied. Heat is applied indirectly through the walls of the vacuum chamber.

A vortex evaporator uses centrifugal force, heat and vacuum to remove moisture from a sample. Unlike the spinning motion of a vacuum concentrator, the vortex evaporator creates a vortex motion within the sample container so that centrifugal force holds the sample into its container while vacuum is applied to the liquid sample. Without an opposing force to hold the sample into its container, it would “bump,” or splatter out of its container. Vortex motion also washes the analyte (analyzed material) down the sidewalls of the glassware, increasing the recovery of the analytes being tested. In vortex evaporation, heat is applied directly into a sample through a block that holds the sample.

Nitrogen blowdown evaporators use heat and a nitrogen stream to evaporate moisture from a sample. Evaporation rates can be increased if a vortex motion is created to increase the surface area of the sample. Dry block heaters are commonly used in these evaporators and offer many advantages over water baths.

Use the Lab Evaporation Scout™ to determine the perfect model for your needs. 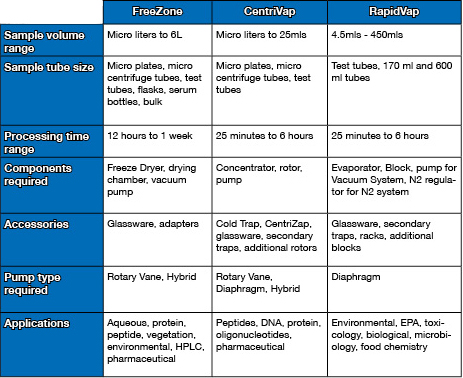