By By Scott Anthony Patterson with Gary Roepke (Sustainability Committee) 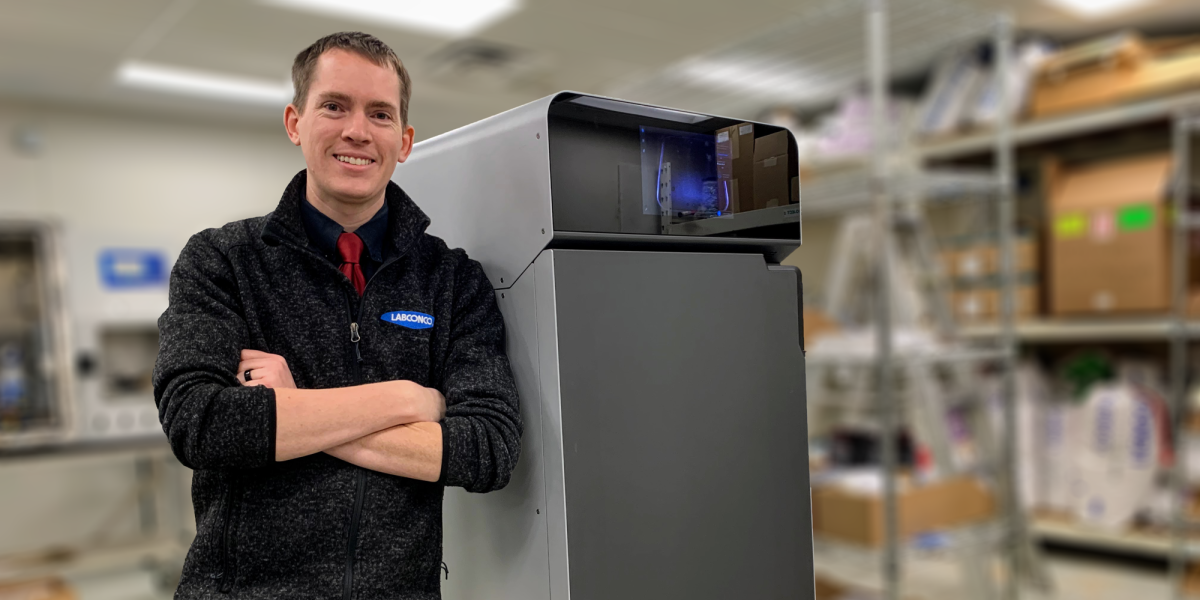 I had heard the rumblings that Labconco was experimenting with 3D printing, but I had no idea how far we had taken it. I met with Labconco Product Engineer Brent Griffith to find out how 3D printing was making Labconco manufacturing more sustainable, and he took me on a tour of his alien world of additive printing machines. I was amazed to find a room populated with dozens of 3D printers that I didn’t even realize we had in our facilities. They overwhelmed most of an area we used to call “the ping pong room” because it historically housed a popular breaktime diversion for our engineers. What I saw there blew my mind.

The room bristled with machines of various sizes. Some sat on the floor and stood about shoulder high. Others were scattered on shelves and benches, and every one of them was humming and clicking with activity. Brent pointed out a digital display on one of the machines that depict what’s going on inside of it in real-time. “It’s printing a connector for our freeze dryers that is not currently available on the market” due to the continuing supply chain issues that have plagued the last few months of 2021, Brent explains. “This prevents us from having to go out and find another connector that works and revise the [engineering] drawing, and all the labor that has to go into it. [Product Engineer] Dan Heck just sent me a model, and it took me about five minutes to set this up. And he’ll have the parts today–he requested them today and he’ll have them today,” Brent says. The turnaround time is an immense benefit.

“The best part is the sustainability,” Brent went on. “When the supplier manufactures it, they’re using a subtractive process that creates a lot of waste–basically punching parts out of a sheet of plastic. All that waste material gets thrown out. This is where sustainability starts to come in. With our [3D printing] additive manufacturing, we’re building that part up, and it’s in that shape. So there’s very little to no waste as a part of that process.”

It’s also fast. “Just as an example, as soon as purchasing got ahold of it–they’re having issues trying to get parts right now–there’s a part we’re printing right now.” It was a small nylon bushing that we use in many product lines. “We went to make a big order of about 3000 parts, and the supplier said, ‘We don’t know when we’re going to get these in. It could be another 18 months. We don’t know.’ We were able to fulfill that order faster than our supplier could, even when they had the parts in stock.”

The materials we use, especially in prototyping, are much more sustainable than traditional materials. “We can use PLA,” Brent says. “It’s made out of corn or tapioca. It’s bio-sourced, which makes it more renewable than things like ABS or nylon that are made out of petroleums and other chemicals.” We also work with other materials that are completely biodegradable. “We can take these parts, use them in engineering, throw them in the compost pile, and in 90 days they’re gone.”

Prototype parts used to check fit and function are now made of biodegradable materials. “We just do that with one of our FDM printers,” Brent says. “You know, engineers tend to be packrats. If we made it out of something that lasts forever, it would be here forever,” he says with a laugh. “So when I can tell them, ‘You’ve only got 90 days to use this,’ there’s some advantage to that.”

He also talks about some of the other biodegradable materials that are available. “I’ve printed with material from a company called Algix. They make a filament for FDM printing based on nuisance algae. So that pond scum that gets on the top of retention ponds? They can scrape that off and turn it into plastic we can use. It stinks to the high heavens, but once it’s made, it’s a really good, strong, durable material. It’s also very sustainable. It doesn’t degrade unless it’s under heat, but it does degrade.”

I point out what looks to me like steam emitting from a printer, and Brent explains that “it puts down a very fine bed of nylon powder, and it heats everything to just under the melting temperature. The laser is a 10-watt laser–it only needs to be 10 watts, that’s low.” This is another point of efficiency that strikes a chord with Labconco’s Sustainability Committee. Brent hands me a freshly finished part and lets me handle it. “It’s very durable,” he continues. “It’s resilient and will last a long time. And the surface finish, especially after it’s sandblasted, is pretty nice.” So these finished parts can be used as outwardly visible components of Labconco equipment as well. “You wouldn’t know that you were holding a 3D printed part,” Brent says. It’s honestly amazing to behold. The level of detail that these machines can produce is astounding.

The room buzzes. No time is wasted–Brent seems to keep each machine very busy. “This one prints at 700º Fahrenheit,” he says, showing me a particular machine. He says it’s particularly useful for creating parts for our glassware washer line since washer parts can get very wet and very hot. Brent points out that the manufacturer of some of the 3D printers prints parts for the printers they make. It gives me the impression that, with just a little more artificial intelligence, these machines could build or repair themselves.

“We can also print a carbon fiber-filled PEI plastic. Again, additively, so there is no waste. And it has a tensile strength of 21 KSI. By comparison, aluminum has a tensile strength of 18 KSI,” Brent adds when he realizes that the measurement went right over my head. “So we’re making parts that are stronger than aluminum and have about the same heat resistance. They’re going to hold up just as well, if not better.”

He also detailed how 3D printing parts for one of our product lines will significantly improve heat transfer, “which means we can provide a better product to the market than any of our competitors by using additive manufacturing. They can’t even come close.” Moreover, the investment required to catch up with Labconco’s 3D printing technology will cost prohibitive to our competitors. To catch up with us, they would need an expert in 3D printing, months (or possibly years) of research and design work, a serious investment in 3D printing equipment and space to work with it.

“If you’re looking for someone who’s got ten years of experience in 3D printing, they don’t exist,” Brent says. It’s going to have to be someone who was geeking out on 3D printing at home in its fledgling stages, I assume. “And that’s where I started,” Brent says. “About twelve years ago I got a 3D printer, which back then they were made out of wood.” He laughs at the thought. He tells me about how he had to create some of his printer parts to make it work, and that printer parts were often sourced from equipment intended for other applications. There was no such thing as a mass-manufactured 3D printer at the time.

We got into a conversation about the dangers of 3D printing and the steps we have to take to avoid coming into contact with dangerous ultra-fine particles and chemicals that the machines could introduce into the work environment if not used properly. That’s when I realize the expertise Brent brings to Labconco is truly invaluable.

We originally printed only prototype parts. Brent can give you the exact dollar amount that we spent on materials in the first year, and it’s a very small sum, considering the effect the process has had on our production capabilities. “We looked at what it would have cost if those parts had been produced outside of Labconco.” It would have cost almost 150 times as much. “So we quickly embraced it. It was easy to justify the expenditure on equipment.”

“The ROI is fantastic on everything we do in 3D printing,” Brent says. “It’s hard not to save money when you 3D print parts and Austin [Orme] also looked at production parts. What could we make if we were to stop injection molding, stop paying [thousands of] dollars per tool, stop paying 35 cents per part and bring that in-house?” The team was able to locate the equipment needed for the level of production they proposed at just a fifth of the budget they were given, and our 3D printing capabilities have been growing ever since.

The ping pong table has found a new home in a stock room of our manufacturing facilities.