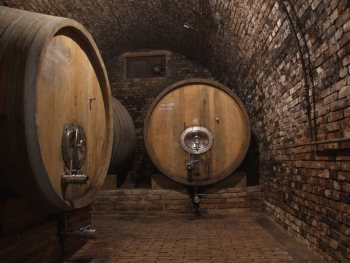 The sweet, smoky flavor of whiskey begs to be married with chocolate, yet it doesn’t present itself to be easily married to a chocolate bar. The aromatics of the smoke and whiskey are not easily captured because heat destroys these flavors. Compounding the complexity is the fact that neither water nor alcohol can be added to chocolate. The challenge, then, becomes not only capturing the whiskey barrel flavor—but capturing it in a form that is, indeed, compatible with chocolate. Luckily, science can solve this problem. Chefs and food scientists have recently started to develop protocols to capture these delicate heat and photosensitive flavors with the goal of integrating them into recipes.

The methodology discussed below can be used as a guide to isolating other flavors in the laboratory and kitchen. Each step is measured and improved upon, and studying the key ingredients on a molecular level is pertinent. What organic chemistry molecules react with each other, and what is the result of these combinations? In addition to methodology, protocols also provide a way to measure affordability and adaptability, potentially making manufacturing possible on a larger scale.

Below, learn how a few inquisitive minds developed a protocol as they set out to capture the whiskey barrel flavor using a lyophilizer, or freeze dryer, for inclusion in chocolate.

Step One: Identify a Goal to Achieve or a Problem to Solve

A chef and a chocolatier from Kansas City set out to capture the flavor of charred oak whiskey barrels for use in the making of artisan chocolate. They first tried to capture the flavor with infusion by storing the cocoa nibs in the charred oak whiskey barrels. The flavor from the infusion method did not stay with the cocoa nibs once the chocolate was manufactured into bars. Heat was driving off the aromatic compounds.

To solve their dilemma, the chefs sought the advice from freeze dry experts at Labconco Corporation, a scientific laboratory equipment manufacturer also located in Kansas City. After a discussion regarding the best method, the group endeavored to isolate the flavor of charred oak whiskey barrels by lyophilization. Lyophilization was the chosen method because it removes all liquids without the use of heat, increasing the yield of sensitive aromatic compounds found in the flavor profile.

When they began this process, the team did not know if it was even possible to use lyophilization to capture a flavor in powder form, Goldstein said. Soon, though, they found themselves pleasantly surprised. "The first time we had a solid freeze-dried cake, we were really happy," she said.

While the use of unconventional scientific equipment in the kitchen is not an entirely new practice, Prater said its presence in the industry is increasing.

"Chefs using this sort of scientific equipment in the kitchen has grown, especially in the last 15-20 years. Chefs are looking for a better way of doing things. There's been a lot of focus on one thing: people care about what they eat now in a way that they didn't years ago," he said. "They want authenticity. Here, we were working from actual whiskey barrels. It doesn't get any more real than that."

There were many variables the team controlled when isolating the flavor of charred oak whiskey barrels. For example, they modified the amount of water and type of alcohols until they reached their goal. Changing solvents and dilution ratios resulted in varying lyophilization times and results.

"It could take anywhere from 24 to over 48 hours to complete the freeze drying process, and that was largely dependent on the starting volume," Williams said. "The alcohols came off fairly quickly. Sometimes we had to deal with sample melt back, as samples with high alcohol content have lower freezing points."