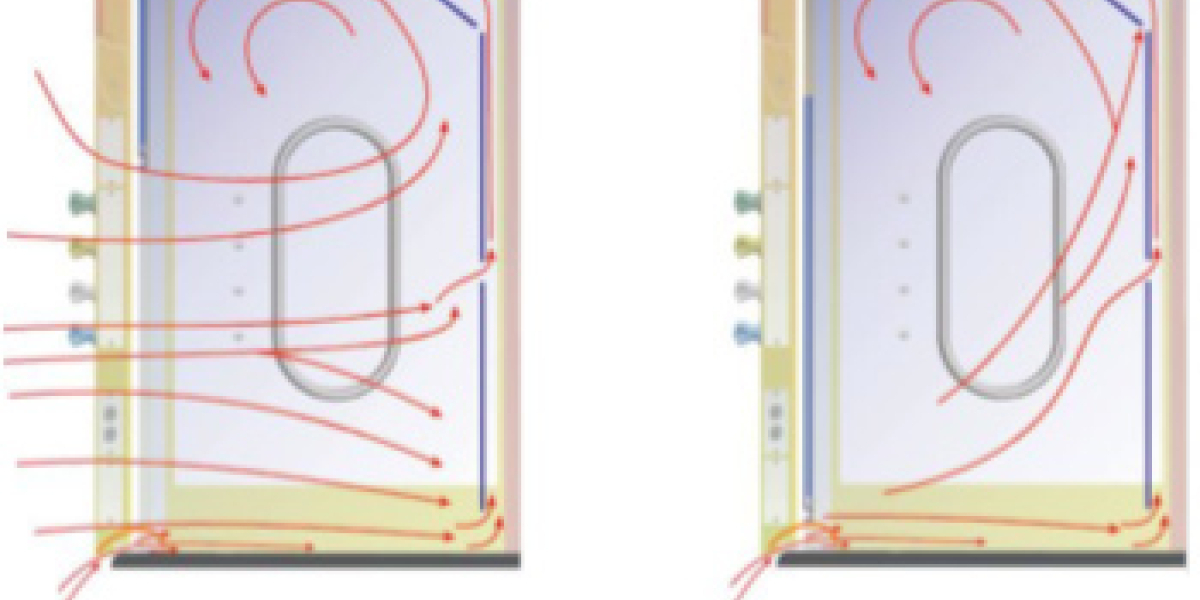 Chemical procedures commonly require the introduction of heat. This is typically in the form of a hot plate or open flame. While the best place to perform these types of chemical procedures is inside a chemical fume hood, most people are unaware of heat’s effect on the airflow through the fume hood, and the potential impact on containment.

A fume hood under normal operation has air entering through the face opening, as well as through an upper by-pass opening. As the sash is raised, less air enters the by-pass, and as the sash is lowered, more air enters through the by-pass.
Sometimes there is a level of heat generation inside a hood greater than the volumetric rate of air (CFM) can adequately dilute. When the rate of heat generation is sufficient enough for the temperature of the hood interior to increase, it can generate a resulting increase in pressure, or decrease in the pressure differential, at the upper portion of the fume hood. This ultimately can result in a reversal of airflow through the upper by-pass opening on the hood, pushing contaminated air into the laboratory. This chain of events is called Heat Effect.
To eliminate or mitigate Heat Effect, we look at two criteria:
1. Dilution: There must be an adequate volumetric rate of air (CFM) to maintain a level of heat dilution that keeps the interior change of temperature below the individual hood’s specific temperature threshold for Heat Effect.
2. Face Velocity Compensation: There must be a minimum base line velocity (fpm) maintained when no heat is present, to overcome an increase in internal pressure as a result of the temperature increase. This is especially critical to the upper by-pass, and is directly related to the design of the hood, including size and shape of the opening, as well as baffle design.
If Dilution is maintained, Face Velocity Compensation is not critical as the internal pressure of the hood will never increase. If the rate of Dilution is not significant enough to prevent temperature increases at the top of the hood, Face Velocity Compensation can temporarily mitigate Heat Effect via localized heat dilution at critical openings in the hood.
Sizing the mechanical system airflow for Heat Effect is critical. Fume hood manufacturers should be familiar with their fume hood’s Heat Effect threshold and be able to provide users with required airflow data for a specific heat source power output (BTU/hour or Watts).
If the fume hood will be part of a variable air volume (VAV) mechanical system, the controller should be programmed to maintain a minimum volumetric rate (CFM) for adequate dilution. This means that as the sash is closed, the volumetric rate of air is reduced, the system reaches a minimum CFM higher than is typical on a standard VAV fume hood, strictly for the purpose of controlling the interior temperature.
If a by-pass style hood is set up on a constant volume installation, there is not a VAV controller and as the fume hood sash is closed, the face velocity will increase. This is of concern because face velocities above 120 fpm can create significant turbulence in front of the operator, and it can be difficult to work deep enough into the hood so that the operator’s hands are not in turbulent air. Working in turbulent air caused by excessive face velocity may result in periodic exposures to chemicals. If the velocity of air around the operator is reduced, the area of turbulent air in front of the operator will be reduced as well. However, low face velocities and volumetric rates are in direct conflict with mitigating Heat Effect. The optimal design CFM should include a combination of low enough face velocity to prevent periodic operator exposure, and fast enough face velocity to prevent catastrophic failure from heat generation. This is achieved by setting the volumetric rate requirement for the hood based on dilution with the sash at its operating height, and Face Velocity Compensation with the sash in its fully open position, whichever of the two figures is greater.