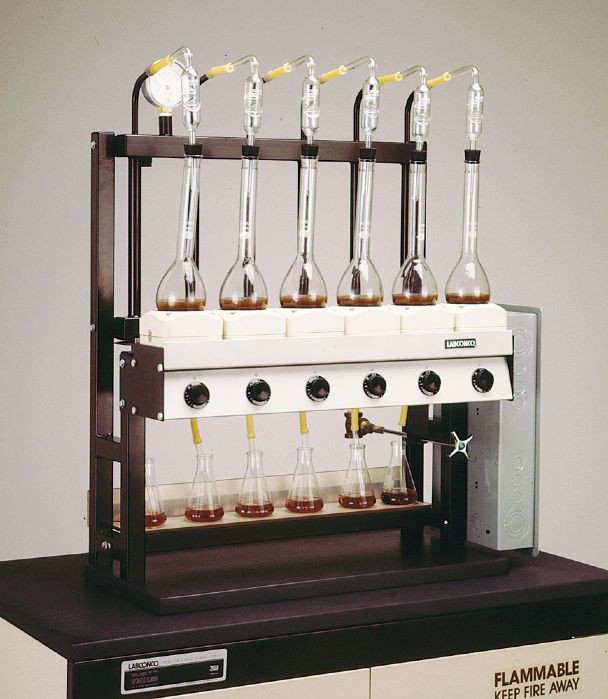 Analytical/Quantitative Chemistry involves the application of separation science. In order to identify the amount or quantity of a chemical within mixed liquid, the individual components must often be separated or purified from the other chemical components. To accomplish this, classical chemistry methods (aka, wet chemistry methods) are used as separation procedures. Distillation is one of the most common methods.

Distillation has been used for hundreds, possibly thousands of years to separate mixtures based on the boiling points of chemicals. In its simplest form, a mixture of liquids is heated forcing the chemicals to boil at their different boiling points. The mixture components that has the lowest boiling point, boils first. The gas is then condensed back into liquid using a cooling column system and then collected in a separate flask. The process can be repeated over again on the collected liquid to improve the purity of the individual chemical. The process of re-distillation is often called double distillation. Interestingly, the reverse process can be used to separate gases by cooling the gas until the individual gas components condensate into a liquid.
Distillation is used to collect and purify many chemicals, such as alcohol, gasoline, distilled water, xylene, paraffin, kerosene, and many others. The simple distillation process described above can only be used to separate liquids efficiently with boiling points differences greater than 25 °C.  Many variations of the distillation process have been created to avoid this limitation. Other types of distillation include fractional, steam, vacuum, zone, reactive, catalytic, extractive, flash and rotary.
Laboratory scale distillation equipment generally includes a boiler flask for heating the mixture, a water cooled condenser in which the hot gas is cooled back to a liquid, and a receiver flask in which the purified liquid (called the distillate) is collected.

The Kjeldahl TKN Method involves a three step procedure: digestion, distillation and titration. In this chemical method, ammonium, which contains nitrogen, is produced during the digestion due to the reaction of organic compounds and sulfuric acid. The ammonium Ion that is produced must be transferred from the complex acidic mixture to a simpler solution for quantitative titration analysis. So the second step uses distillation as a transfer process. Before distilling, the ammonium ion is converted to ammonia (a volatile gas) by the addition of sodium hydroxide. The ammonia will de-gas out of the now high pH solution with or without the distillation procedure. Ammonia transfers along with water during the distillation into an acidic trapping solution in the receiving flask. This method uses distillation as a simple physical transfer process moving ammonia (or nitrogen) from one vessel to another.
In the third and final Kjeldahl step, the receiving solution is titrated with a known standardized solution, which reacts to the ammonium ion and provides a measured total nitrogen concentration. Total Kjeldahl Nitrogen, or TKN, is the sum of organic nitrogen, ammonia (NH3), and ammonium ion (NH4+). TKN analysis is often a required by governmental regulatory agencies such as the EPA and FDA for environmental and food safety reasons.