The Miracles of Science Surround Us

After a frenzy of meteorological research on how this masterwork of Mother Nature was produced, I called my local TV news station and was rewarded with a five-part scientific explanation for the perfect storm. 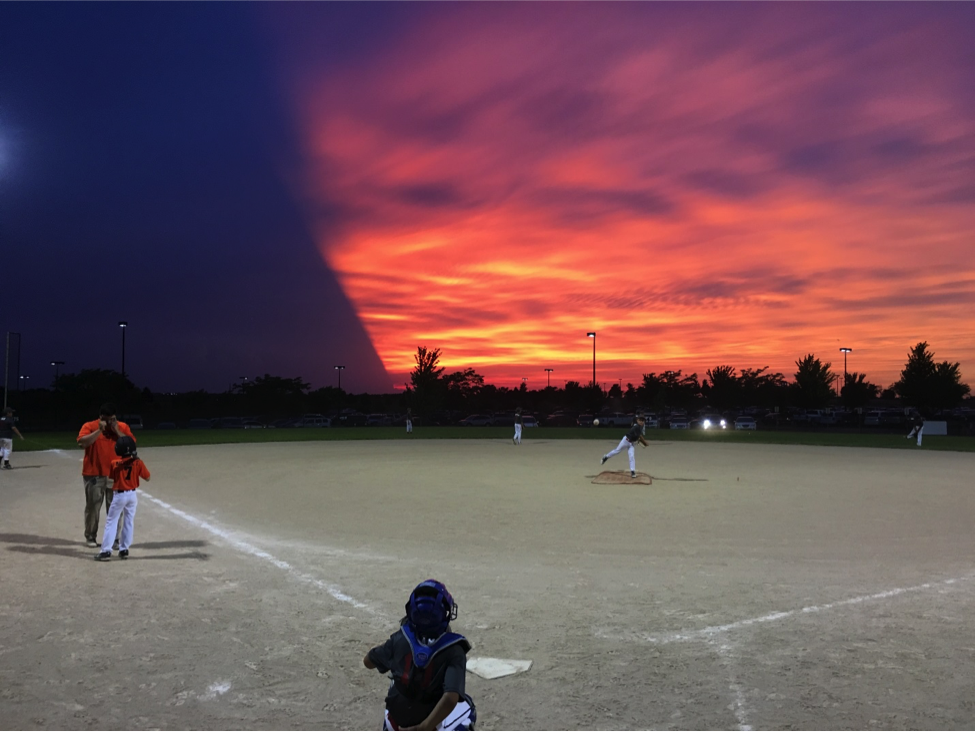 Should I really have been looking at the clouds while coaching my son’s baseball game? I frequently chide our players when they get distracted chasing fireflies in the outfield, fooling around with their hats, watching ant hills, counting airplanes, cheering for another game on an adjacent field, or any one of the 4,927 things that they are doing except for paying attention to our game on our field.

Yet there I was, mesmerized by a spectacular, distant sunset lightning storm.

As luck would have it, we were stuck with an 8 p.m. game that night. Since we were well into summer, we were blessed with the sunset behind the outfield fence during our game. And I mean we were blessed because first, we had the beauty of playing the game during the sunset hours, and second because it meant the temperature would drop from a scorching 103° F to a merely simmering 100° F by the time the game was over.

Ahhh, the little joys we look forward to here in the Midwest during June.

This particular sunset was a peculiarity for all of us, and we could not help but be awestruck. Regardless of weather, we were supposed to be paying attention to the ballgame. So I slipped behind the plate during the between-innings warmups and snapped the accompanying photo.

Notice the gorgeous color of the sunset and the striations of the light coming almost straight out from the behind the left cloud wall. We could see on our weather apps the effects of a fairly substantial thunderstorm about 75 miles west of us in Topeka, Kansas.

None of us had ever seen the sky essentially cut in half.

What my still photo doesn’t fully capture is that the left half of the sky was a giant lightning storm way off in the distance. The incredible amount of lightning was giving us quite a show. We could tell something was brewing out there, which we are accustomed to in June here in Tornado Alley.

Here is an interesting radar image of what exactly was going on at the time:

This is a long-range radar image of the wide Midwestern area two minutes before I snapped the image above. You can see the major red cell parked almost on top of Topeka.

It also gives perspective to the distance between the Storm in Topeka and our location in Lee’s Summit, Missouri, just southeast of Kansas City.

According to many Kansas news stations and weather reporting websites, several areas in-and-around Topeka, KS reported hail up to 1.25” and about 9000 people lost power during the storm that night. During our kids’ baseball game we were convinced we would get rain in our hometown, yet within two hours, that large cell had moved well south of our area. We didn’t get a single drop of the rain we thought was sure to come our way.

While the radar images are cool, I really wanted to understand what made that very distinct slice across the sky during that sunset. I tried searching around some weather websites, NOAA and others to learn more about storms and cloud formations; but I really could not find that magic bullet that could explain this one specific thing that we saw that night. Then it hit me: “Ask a meteorologist!”

I called one of the local TV stations and they put me into the voice mailbox where I was sure my message would flounder. In less than 10 minutes Jesse Hawila, one of the meteorologists from KCTV5, called me back and said, “I think I know which night you are asking about because we were all having a great time with it here in the studio as well because of how unique it was.”

He explained that essentially the visual phenomena was caused by the storm’s incredibly high cloud top (50-55,000 feet high), coupled with distinctly clear western sky behind that storm cloud, combined with the perfect angle of the setting sun - because of the time of year and the position of the sun in the sky.

The storm cloud was basically completely isolated in the sky and the setting sun had a direct path to that storm cloud, causing the storm cloud itself to actually cast a shadow, which formed that sharp line that we saw across the sky from our side. He said it was an “A+B+C+D+E situation” where all those factors had to line up perfectly, so it was very cool that we all we able to witness it.

Labconco has been based in Kansas City since our beginnings in 1925. This article's author, Adam Keithley, is Labconco's Marketing Manager.