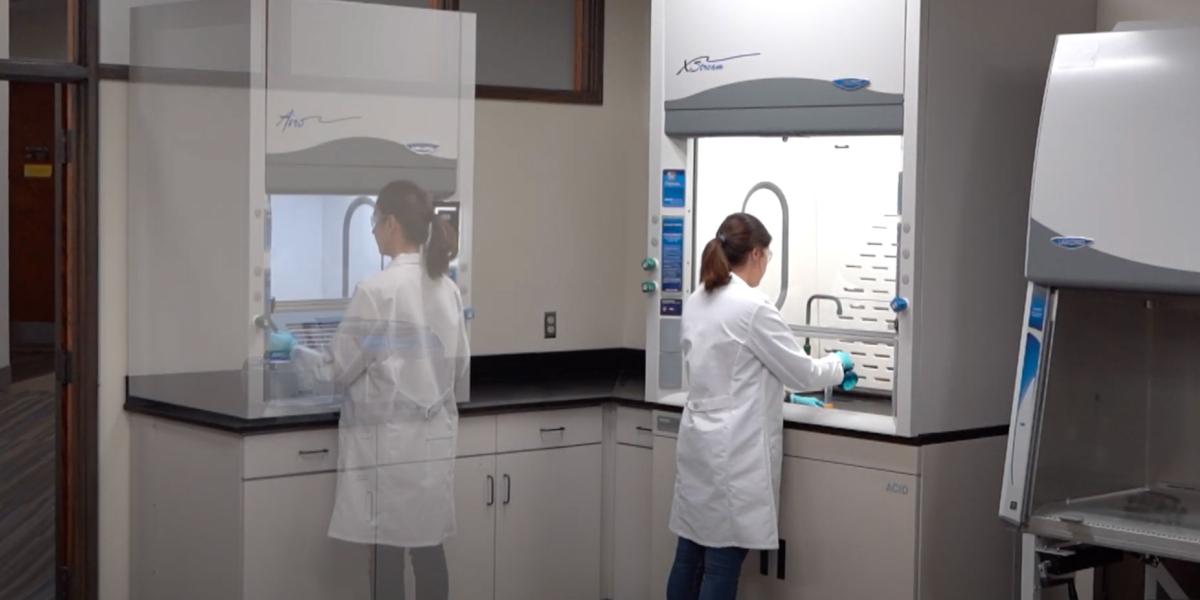 Very loosely speaking, a Zero Net Energy (ZNE) building is one that consumes only as much energy as it can produce by renewable methods. In short, and as outlined in previous reporting, ZNE lab design is an energy balancing act—one that’s both critical to the future of our environment and challenging for architects, engineers, and laboratory planners.

It’s not a simple or quick process, but the industry has seen much progress toward the ultimate goal of being carbon neutral by 2050, a goal outlined in American College and University Presidents Climate Commitment (ACUPCC). This commitment covers any energy consuming university building—standout candidates of which, certainly, are laboratories.

I’m optimistic yet also realistic, and let’s just say we are very behind. As the New Buildings Institute (NBI) reported, nearly 600 ZNE projects were completed in 2019. In 2016, there were 53—one of which, the first in the United States, I had the pleasure of working on: the John J. Sbrega Health & Science Building at Bristol Community College in Fall River, Massachusetts.

I won’t go into the specifics of that project here. Rather, I want to share lessons and takeaways about the what ZNE lab design looks like practically and what you need to know if you’re considering tackling your own project in the future.

First Things First: What it Takes

A ZNE laboratory build is rare for a reason: to start, it takes a committed team, from owners to architects to engineers to contractors. It takes an administration of an academic institution that is focused on keeping its promise to the environment and the community—and, this goes without saying—is willing to put money behind these initiatives. Having the perfect storm of environmental factors helps too. For example, for city-bound universities that do not necessarily have the space to build out on site renewables the hill they must climb to reach the ZNE summit is much steeper.

It's also important to keep in mind that not every laboratory is suitable for ZNE. You should never sacrifice safety for energy conservation—something I don’t have to tell anyone who has ever stepped in front of a fume hood, ducted or unducted, or the designers and architects of the labs that hold these important resources within our scientific and academic community.

If you’re running an industrial application with high levels of chemical evaporation, for example, you can aim for LEED certification in your building, but reaching ZNE is likely out of the question—at least for now.

Personally, I’ve found that undergraduate teaching laboratories that engage in chemistry applications—or other applications where the science is repetitive, such as quality control test labs or small scale research—are the best candidates for this type of build. 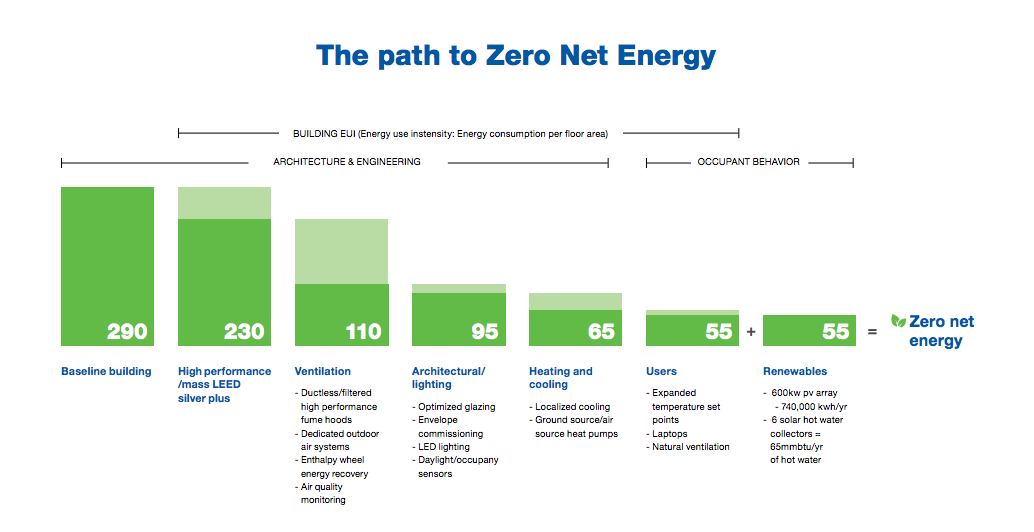 As you can see from the graphic above that evidences my ZNE building experience, optimizing laboratory ventilation is what makes the construction of a ZNE, you could say, “flow.”

You have to minimize the fume hood exhaust volume in your lab building if you want to achieve ZNE, period. If you can’t, you won’t make it. You do this by optimizing your laboratory ventilation, generally through a focus on filtered or ductless hoods. But that doesn’t mean ducted hoods are the bad guys here, either. It is, again, a balancing act. Let’s take a closer look.

I’ll get right into it: the first hood in any lab should be a ducted hood because it can handle applications filtered hoods can’t. As Fume Hood Specialist Kasey Fulmer of Labconco often says, “You can put anything in a ducted fume hood.”

He goes on to say that just because the above is true, “it’s critical to get the energy usage as low as possible.”

The best ducted fume hoods are those with designs that focus on safety, ergonomics, and energy-savings, at once. In the conventional fume hood, it was assumed that safety was determined by face velocity—which was, for a long time, 100 feet-per-minute (fpm). As technology has advanced, testing protocols have become more thorough in determining what is safe, and we’ve found that face velocity is not the determining factor. In other words, a higher face velocity does not equate to a fume hood with substantially better containment.

Today, a high performance fume hood is defined by SEFA as one that exhausts at 60 fpm. The Protector XStream, for example, was tested at well beyond the SEFA-1 standards. Patented technologies spanning design of the baffle, sash handle, air foil, and more allow this ducted hood to stand out in the crowd. (A 6’ Protector XStream operating at 60 fpm face velocity, with the sash fully open, requires only 690 CFM.)

When selecting ducted fume hoods in pursuit of a ZNE outcome, also consider the value of choosing one that can accommodate a variable air volume (VAV) system. These systems pull significantly less air, magnifying their ability to contain at lower face velocity and including design elements that help reduce energy overconsumption as a result of human error.

All in all, ducted high-performance fume hoods are necessary components of any ZNE lab. The key, however, is finding the right mix between ducted and unducted. Obviously, unducted hoods use less energy and are key players in ZNE laboratory builds. In 2014, we at Erlab teamed up with Labconco to introduce the Protector Echo, which delivers unprecedented levels of safety, adaptability, and energy savings to laboratories. Core to the technology that makes the Protector Echo so special is the Neutrodine Unisborb Filter from Erlab, a key part of our GreenFumeHood technology, which is a comprehensive molecular filter that allows the simultaneous handling of acids, bases, ammonia, formaldehyde, and solvents. In other words, as the team describes it, these transform the molecules, not just filter them. Removing air locally and recirculating whenever possible is—if your applications are suited for it—the most important step to ZNE lab design.

In working with engineers specifically on projects like this, I have found many aren’t fond of me when we start to talk about sustainability because there’s the perception I am going to take things away from them. With Bristol, it was the opposite. It’s often the ductwork that goes away, not the functionality.

The bottom line is that filtered hoods, like the Protector Echo, are more economical and have a lower energy footprint than their ducted counterparts. While less ducting means less energy usage, it’s important to note that both have a place in a high-functioning laboratory—and high-preforming hoods that employ sustainability-focused science are by far the best choices in ZNE lab design.

Other Core Components of a ZNE

As you can see from the pyramid below, optimizing ventilation and reducing fume hood draw is at the base of considerations when it comes to ZNE lab design. 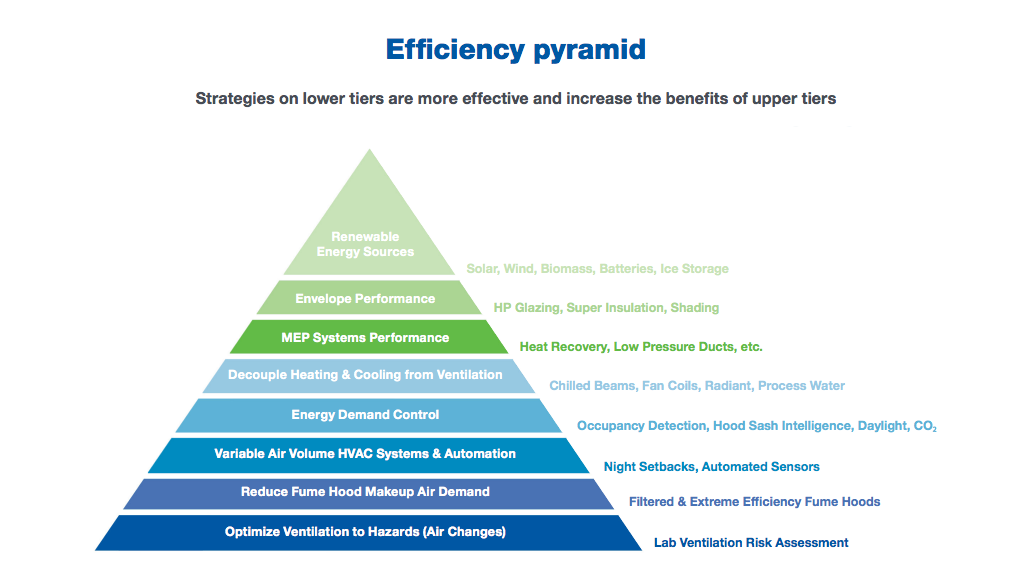 Resource: Jacob Werner of Perkins + Will

Once that foundation is shored up, though, what’s next? As you examine your energy usage intensity (EUI) in kilowatts per square foot per year, you’ll need to tighten your envelope to reduce that number such that it’s low enough you can offset with your onsite renewables. That’s the finish line.

One key tip to reach it involves—not surprisingly—your HVAC system. Explore high-efficiency cooling. Note that ground source heat pumps work year-round, not just for cooling. A closed-loop system with a deep well, for instance, can also be a great option to warm your building in the winter. In short, shrink the size of your HVAC systems as much as possible and use better technologies (such as solar) to produce an entirely different system.

When it comes to solar, remember your approach should be climate-zone based. This will dictate how much shading and glazing you’ll need to use and will, in the big picture, dictate what technologies you should and should not pursue.

Don’t forget the human factors piece, either. This is all for humans after all, right? When you have a ZNE lab, you also must have the occupants of that lab be on board with ZNE protocols. A simple lack of signage, buy-in, or explanation, for example, can undermine the goal—the achievement of which, as we all can agree, has a huge impact on our future.