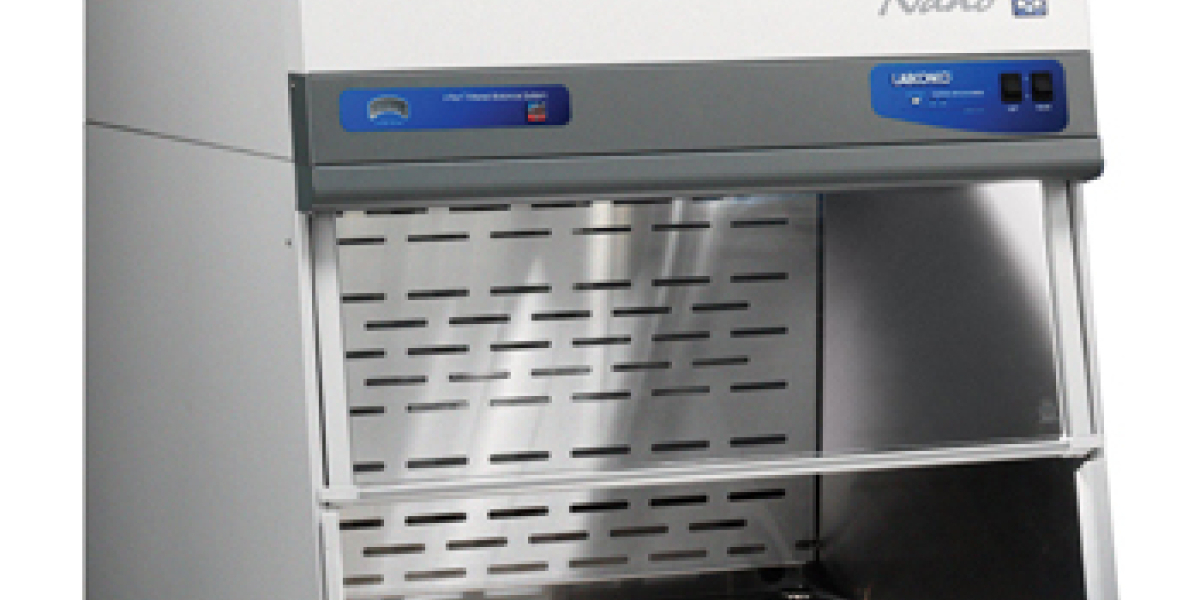 Although there has been considerable progress in improving our understanding of the environmental health and safety implications of some nanoscale materials, many pressing questions remain as to the toxicity and likely exposure routes for the majority of engineered nanomaterials that are manufactured or otherwise handled in the laboratory. Despite these knowledge gaps, research at the nanoscale remains an important pursuit of academic, commercial, and government entities around the world.

The Labconco XPert Nano Enclosure was developed to contain nanoscale particulates generated during critical transfer steps, but the lack of standardized testing protocols for aerosolized nanomaterials complicates efforts to validate containment of such devices.

To overcome this challenge, Labconco partnered with NanoSafe, Inc. to develop and implement a testing program to verify the containment of a nanoscale aerosol by the XPert Nano Enclosure.

NanoSafe, Inc. developed a testing program to independently evaluate the generation and containment of a controlled nanoaerosol inside a Labconco XPert Nano Enclosure. The purpose of the evaluation was to compare nanoparticulate levels generated inside the enclosure via a specialized ejector to particulate levels around the enclosure’s sash opening and ultra low penetration air (ULPA) filtration exhaust.

Test methods integrated aerosolization and characterization strategies described in recent peer-reviewed studies and one existing test method developed for fume hoods. Studies compared the generation of nanoscale particulates via an automated ejection method as well as during manual pouring of commercially-relevant nanomaterials.

The automated ejection method provided the most useful assessment of nanoparticle containment by the XPert Nano Enclosure and thus these data are the focus of this presentation.

According to Labconco product literature available at www.labconco.com, “the XPert Nano Enclosure provides user protection by keeping hazardous powders and particulates contained during procedures such as nanoparticle manipulation and dry powder chemical handling.”

The patented containment-enhancing design features maintain user protection by drawing room air into the front of the enclosure, sweeping the cabinet interior, pulling the air to the back through the patented baffle, and filtering the air through a 99.999% efficient bag-in/bag-out ULPA filter before returning the clean air to the laboratory.

The all stainless steel interior (sides, work surface, removable baffle and removable air foil) is designed for easy wipe down and cleaning procedures. An optional built-in ionizer neutralizes static charge on interior surfaces by emitting ions into the airstream, which helps reduce weighing errors and attraction of particles to the enclosure surfaces.

To evaluate performance of the XPert Nano Enclosure with aerosolized engineered nanoparticles, a series of tests were designed to generate precisely controlled nanoaerosol inside the enclosure and subsequently measure particle size and concentration at various locations inside the enclosure, around the sash opening and at the unit’s ultra low penetration air (ULPA) exhaust.

Studies were adapted from ASHRAE 110-1995 and involved traverse testing of the sash opening and ULPA exhaust during aerosolization of a precisely controlled aerosol of SiO2 nanoparticles with a geometric mean diameter of 23±1.4 nm (Figure 1 & 2).

Generation of the SiO2 nanoparticle aerosols was accomplished using an approach adapted from Ostraat et al. (2008). The overall testing approach was based on Section 7.11 of ASHRAE 110-1995 (Method of Testing Performance of Laboratory Fume Hoods) with some modifications (e.g., SiO2 nanoparticles used in place of tracer gas, tests performed in clean room). 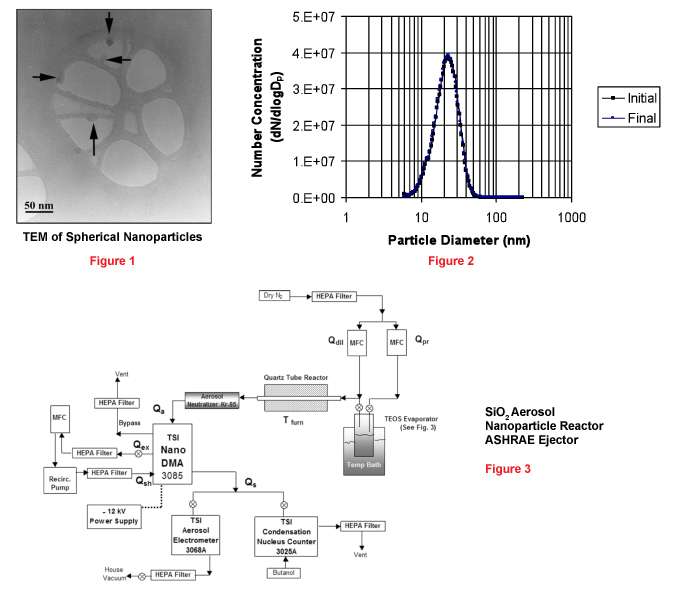 A TSI diluter Model 3302A was used to reduce the aerosol concentration in the CPC sample stream to be on-scale of the CPC. The diluter was operated at an 80:1 dilution ratio. The reported challenge particle concentrations have been corrected for this dilution ratio1 (Figure 3).

The size distribution of the challenge aerosol was measured with a TSI Scanning Mobility Particle Sizer (SMPS). The SMPS used a long DMA (TSI model 3081) and TSI model 3022A CPC. The SMPS was operated with 15 Lpm sheath air, 1.5 Lpm aerosol fl ow, 240 second upscan, 15 second downscan on a 6 minute repeat cycle. The scans covered the particle diameter range from approximately 7 to 224 nm.

The TSI 3022A CPC (without diluter) was used to perform the traverse measurements. The traverses were performed with a hand held probe connected to a flexible sample line connected to the inlet of the CPC. The CPC sampling rate was 1.5 Lpm. Each traverse began and ended with a high efficiency filter attached to the probe to bring the CPC concentration to zero. Measurements were taken with the ejector positioned at three different locations inside the enclosure.

After completing the enclosure traverses for each of the three ejector locations (Figure 4), the ejector was moved to the center position and the CPC probe placed in the ULPA exhaust duct. A 2-minute sample was taken.

The size distribution of the SiO2 nanoparticle challenge aerosol was measured at the start and end of the traverse measurements. The mean particle diameter was approximately 23 nm with a geometric standard deviation of 1.4. The front mounted pressure gauge read approximately 0.32 inches H2O throughout the test series.

With the traverse measurements around the sash opening showing an average maximum of about 1 particle per cm3, containment could conservatively be expressed as approximately 99.99% (100x (1 - 1 cm3/10,000 cm3)). Determining containment in this manner was not the intent of the measurements nor is part of the ASHRAE tracer gas test.

However, it does help put the results in perspective. Based on results from the “5x full traverse” tests, the average maximum particle concentration measured during traverse-testing of the sash-opening during aerosol challenge was 1.83 / cm3.

For the entire test series, the maximum test value observed around the sash-opening was 3.82 / cm3, but this value was found to likely be an anomaly attributable to external air penetration into one corner of the clean room (similar spikes were observed at this location during background sampling). (Figures 5 and 6)

Sampling in the ULPA exhaust flow showed essentially zero particles. For both the aerosol and background measurements, the two-minute sample counted either 0 or 1 particle maximum. For the two minute ULPA exhaust samples, 1 particle represents a concentration of 0.002/cm3.

Within the sensitivity of the test, the results indicate no leakage of particles greater than 7 nm diameter past or through the ULPA filter. This does not mean that particles of less than 7 nm penetrated the ULPA filter, only that 7 nm was the minimum particle size that could be quantified accurately using our instrumentation.

This test addressed one aspect of enclosure containment. Specifically, modified ASHRAE 110 part 7.11 procedures were used to traverse the periphery of the test enclosure for outward leakage of the nanoparticle test aerosol under static operating conditions (i.e., no human activity in or around the enclosure other than the amount needed to perform the traverse itself).

Below are the design features of the XPert Nano Enclosures that contribute to its nanoparticle containment capabilities. Many of these features are patented by Labconco Corporation.

Products that have been NanoSafe Tested™ are subjected to defined testing criteria developed from peer-reviewed literature and comparable standardized testing methods. Test results are reported in two ways: first, a comprehensive, proprietary test report is provided to the client; second, a one-page, non-proprietary summary report is posted to the NanoSafe Listing, where it may be viewed freely by the general public. Once testing has been completed, the client is permitted limited use of the NanoSafe Tested mark.

The purpose of the mark is to indicate that third party testing has been performed in accordance with the established criteria and that the client has agreed to have an unbiased summary of test results posted to the NanoSafe Listing.