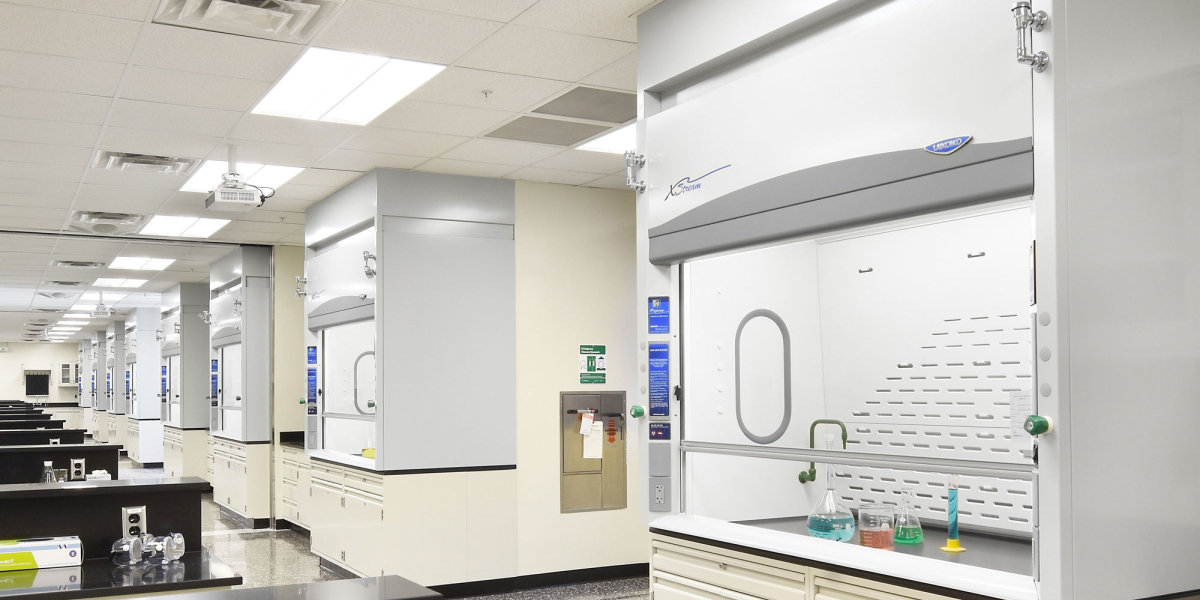 High performance fume hoods are known by many different names, so the meaning of the term is often misunderstood. With all the similar definitions and industry lingo, the terminology can be tricky.

This article will explain what you need to know about efficient energy use in fume hoods for laboratory sustainability.

While a fume hood is operating, air is pulled through it using a blower (usually mounted on the roof of the building). This creates a negatively pressurized environment to protect the user from harmful vapors. The air travels at a velocity, which is measured at the face of the fume hood in the plane of the sash, so it’s referred to as the face velocity (measured in feet per minute, or fpm). This term is very important since standards reference face velocities at which fume hoods may be operated.

The face velocity (fpm) depends on both the volume of air going through the hood (CFM) and the size of the opening the air passes through. The speed of air at the fume hood’s face is dictated by the height of the sash and the volume of air demanded by the blower on the roof.

High Performance fume hoods get different names from different manufacturers. They may be called low velocity, low flow, low exhaust, high efficiency, or energy efficient. All these terms mean that the hood meets the SEFA definition for high efficiency: The Scientific Equipment and Furniture Association (SEFA) sets a minimum standard for high efficiency, and any fume hood making any of the claims above should meet or exceed that standard.

According to SEFA, a high efficiency fume hood must pass the testing requirements described below.

Per SEFA, the definition of an Energy Efficient fume hood is:

Low Velocity Laboratory Fume Hoods are hood designs that provide a reduction in the required exhaust air volume, when compared to the volume required for the same size fume hood to operate with a face velocity of 100 FPM through a fully opened vertical sash and provides containment levels equivalent or superior to ASHRAE 110 tracer gas test ratings of 4.0 AM 0.05, and 4.0 AI/AU 0.10, with a face velocity of 60 FPM or less through the fully opened vertical sash. Low Velocity Fume Hoods are also referred to as High Performance Fume Hoods and High Efficiency Fume Hoods.[1]

The last sentence of the definition demonstrates how several of the terms for this have worked their way into the definition itself. The test is comprised of three parts:

Sulfur hexafluoride (SF6) is a tracer gas that is deployed within the hood during the ASHRAE 110 test. A mannequin is used to stand in for the shape of a person working at the fume hood, with sensors to detect presence of the SF6 tracer gas at its chest and near its face.

Then what is a high performance hood really?

For a manufacturer to advertise a fume hood as a high performance, it must meet the test results stated by the SEFA definition. That’s the bare minimum to qualify. But some hoods are significantly more efficient than others.

There is no magic number for the correct fume hood face velocity in every lab, but standards do specify a range. And the reason standards don’t dictate a face velocity is because 100 fpm on an older style basic hood is vastly different from 100 fpm in some newer hoods. Furthermore, the same hood will differ on the air balance scenario and real life conditions in the lab where it’s installed.

Ultimately, most lab planners want the best possible user protection while seeking efficient energy use for lab sustainability. High performance fume hoods are a key ingredient for achieving those goals.

When operating laboratory fume hoods with lower face velocity set points, energy savings can really add up—some high performance fume hoods can even pay for themselves through efficient energy use in a very short time. Ask the hood manufacturer to help you zero-in on annual savings and return on investment for your specific installation.

ASK US TO ESTIMATE YOUR SAVINGS