In 2016, Creighton University, a highly regarded Jesuit institution located in Omaha, Nebraska, found itself at the top of US News & World Report's ranking of Midwest Regional Universities for the 13th year in a row.

The innovative culture at Creighton is contagious, and faculty and administrators have a history of taking initiative when it comes to academics and programs—the same approach held true when, last year, a committee was created to focus on facility improvements that could boost sustainability.

They were not alone, though. In fact, John Baxter, director of Environmental Health & Safety (EH&S) at Creighton, described a "nationwide push by universities and research institutions to decrease the energy that they use for laboratories without compromising health and safety."

So Baxter—who, combined with Chemical and Sustainability Coordinator, Mary Duda, boast over 23 years of experience in their field—decided to approach a supervisor with an idea.

That supervisor, associate vice president of Facilities and Project Management Tim P. Norton, championed the project to fellow members on the Energy Savings Committee: take a look at the use of B2 biosafety cabinets in the Beirne Research Tower and Criss Health Sciences Center, as the current functionality requirements might be met with less energy taxing equipment.

Wes Walling, director of Mechanical, Electrical and Plumbing Operations at the university and member of the eight-person Energy Savings Committee, said his team was looking for projects that would have a five-year or better ROI.

For starters, they rolled out LED lighting upgrades and installed pressure independent control valves for chilled water. One project in particular, though, stood out. Walling called Baxter's suggestion to replace the B2 biosafety cabinets with more energy efficient and flexible models "an absolute winner from the start."

The Solution: Replace B2 cabinets with C1 cabinets to be used primarily in recirculating A mode

Class II, Type C1 biosafety cabinets can operate in Type A mode for use in microbiological applications, or they can be exhausted for Type B mode applications like those that involve hazardous vapors or radionuclides.

The existing B2 cabinets at Creighton were original to the facility and, as Walling explained, were used because "in the old days, energy was cheap and they just exhausted everything as another way of thinking it was safer."

To determine if a replacement in technology would even be possible based on applications, Baxter met with the Principal Investigators and learned that none of them actually needed the full B2 exhaust capability of their units at this time— but they couldn't rule it out in the future, either. As a result, running the Type C1 biosafety cabinets in Type A mode would not result in any current changes in application.

However, if the users changed their protocols and did need to work with Volatile Organic Compounds (VOCs), they could convert the units to B2 functionality without replacing them.

The team went even further. To maximize the safety of the space in one of the buildings, Creighton installed a valve system that is monitored and controlled not only by the temperature but also the need for air exchanges in the labs, thereby ensuring there are no hazardous chemicals in the air.

The system monitors the lab exhaust air for VOC and CO2 particles, and it alerts EH&S if a room exceeds its parameters. Besides decreasing the amount of energy used to condition the room air, this system also provides an extra level of safety for students and faculty.

The above is just one example of the culture of safety at the university. Norton explained the philosophy further, stating, “As the departmental budget manager, efficient use of Creighton University resources is critically important, but safety is never compromised. This project met both goals and will certainly be a model for additional enhancements going forward.” 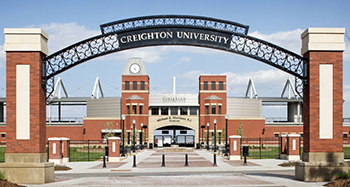 Because Baxter believes sustainability is second only to safety when it comes to areas of importance within laboratory spaces, he said the 11 Type C1 cabinets fit well into Creighton's facility.

After all, Walling's projection far exceeds the five-year ROI benchmark for Energy Savings Committee projects—in fact, his calculations show a project with a 2.6-year ROI and an annual energy savings of $52,645.

Functionality and safety have increased as well. "The design at the bottom pan of the new BSCs provides a visual reminder to workers about the three 'zones' they should be working in," Baxter said, referring to the specially designed work space that encourages users to practice aseptic technique and work from clean to dirty.

"The design seems to decrease the amount of clutter that is left in the back of the biosafety cabinets. EH&S is happy about that unintended advantage to these cabinets."

Peter Oldenburg, Assistant Professor in the Department of Pharmacology at Creighton's School of Medicine, said he found the C1 cabinets quieter than the previously utilized B2s—a nice feature for an educational setting in particular. Additional features, especially those that increase safety and ease of use, appeal to Oldenburg and his lab personnel.

"The fact that it automatically goes into sterilization mode for 30 minutes after the sash is closed is terrific, too, as it is one less thing we have to worry about turning off at the end of the day," Oldenburg said. "Not to mention that it extends the life of the UV bulb."

As far as Walling is concerned from a building perspective, he said he couldn't be happier with the Type C1 biosafety cabinets Creighton purchased to contribute to their ongoing energy saving efforts. "Maybe it was just the right time for technology to finally get in sync with what the laboratory—and the world—requires for better sustainability."