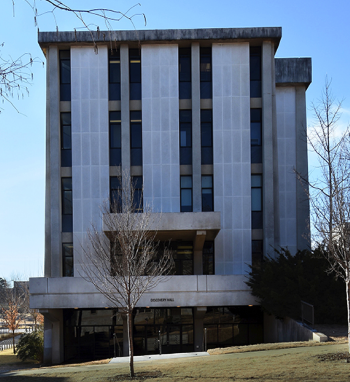 Nestled in the bustling community of Fayetteville is the University of Arkansas, an educational institution home to almost 27,000 students and countless other faculty and academic leaders.

Fayetteville was voted one of America's most beautiful cities in 2012, and—with the help of an ongoing laboratory remodel project at the U of A—is now home to yet another building of which it can be proud.

Discovery Hall, a multi-level, multidisciplinary space dedicated to chemistry teaching labs and bio-anthropology and archaeology, has been undergoing renovations for some time and is slated for completion in January 2017.

Project leaders adopted an extended timeline for Discovery Hall for good reason: the facility has been open for classes throughout its renovation—an accommodation necessity for the seventh fastest growing university in the nation. Since the project began around seven years ago, the university has experienced a 150 percent increase in enrollment.

The transition of Discovery Hall from a dated building to a modern teaching and learning facility has progressed along with this growth.

"This 1960s building will now be a 2017 building inside and out, ready to serve our students another 50-plus years," Mike Johnson, Associate Vice Chancellor for Facilities, said. "We still spent less than what a new facility might have cost by likely 35-45 percent, and we have a modern teaching facility without losing any real class time throughout the process."

Fume hoods are essential in chemistry teaching labs, but not all fume hoods are created equally. Discovery Hall designers knew that as they looked to replace or add the total of 76 fume hoods required in the 49,800-square foot space.

Many of the 76 are Protector XStream Hoods, high performance hoods that blend efficiency, safety and functionality. Operating a 6-foot Protector XStream Hood at 60 fpm face velocity with the sash fully open, for example, requires only 690 CFM—an impressively low yield that results in significant energy and budgetary savings over time.

"The design team specified Labconco's XStream Hoods because they were proven low flow hoods that had been used on another project out at the Incubator Campus (Research & Technology Park), and they were advised the U of A wanted to standardize their hoods for operations and maintenance purposes," James Milner, Facilities Management Construction Coordinator for the project, said. 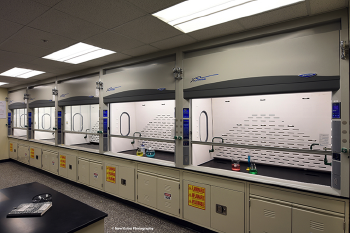 Replacing and adding fume hoods—and entire lab spaces, to that end—is just one element of the Discovery Hall project. To reach the overall goal of producing a safer, more useful space, many additional changes have been made.

For example, fire and smoke alarms have been replaced, electrical primary and secondary services have been modernized to meet current electrical code and asbestos has been abated from the building.

Substantial upgrades in air handling have also been made, including the replacement of makeup air systems, fan coil units, exhaust and control systems. In addition, fixed benches will soon be added along Discovery Hall's corridors to prevent students from extending their legs into the walkway, causing obstructions. 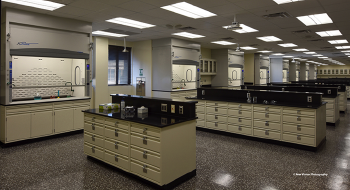 The new labs and additional hoods have greatly increased the student capacity in the building—but Discovery Hall doesn't just have more labs, it has better labs. Worn, stained casework has been replaced with state of the art systems that include epoxy surfaces. All instructional spaces feature AV systems to promote collaborative learning.

All of the chemistry and biology lab and prep spaces now have compliant emergency eyewash and shower stations, and the number of data outlets has more than doubled since construction began.

Building Wi-Fi has been installed along with whiteboards where archaic chalkboards used to be. The insulation, finishings, roof, windows—you name the face-lift, and Discovery Hall has had it done, all while allowing academic classes to continue as scheduled.

"If we hadn't renovated this building, lots of people couldn't take chemistry because we just didn’t have the space to teach them," Wesley Stites, Chair of the Department of Chemistry and Biochemistry, said. "At the worst point, we were running labs from 7:30 am until 10:30 at night and then more on the weekends. Since we've added labs, it's gotten back to normal and brought accessibility back to the program."