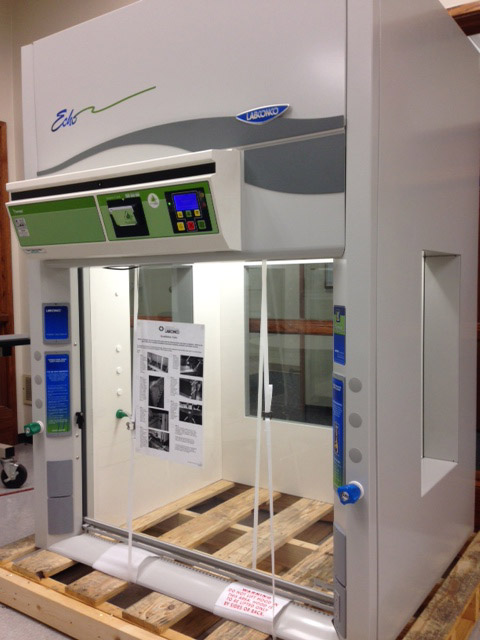 Laboratories that need to save on energy or that are difficult to vent because of their location present a challenging problem for lab designers, installers and architects. Operating a traditional fume hood incurs a huge energy expense, and a lab can be permanently crippled if its designers choose a ductless enclosure that is not flexible enough to handle unpredictable future needs. A filtered fume hood solves these problems because it effectively filters an extensive range of chemicals without costly ductwork planning and installation. Furthermore, the technology is highly energy efficient since costly tempered air stays inside the laboratory, rather than being exhausted outdoors.

Innovations: It's different than other ductless hoods

The newest addition to Labconco’s fume hood line is the Protector® Echo™ Filtered Fume Hood (prototype pictured, right). It fills an opening in Labconco’s energy-efficient fume hood line, offering several features that are unavailable with any other ductless, filtered hood. Labconco’s fume hood expert, Beth Mettlach, points out that “The Protector Echo Filtered Fume Hood is different than other ductless hoods because of its sensor package, backup filters and its optional g-Guard® remote monitoring software. It is intended to work with a broader range of chemicals than other kinds of ductless enclosures.”

Remote monitoring and communication are some of the most important aspects of the Protector Echo. In the event of chemical breakthrough or loss of airflow, an alarm will sound and the communication system will alert a designated email address. The designated safety officer could be made aware of the problem immediately through any Internet enabled smart phone, tablet or computer. Large laboratories and labs where a single safety officer must handle multiple concerns will benefit most from this proactive safety system.

Space, utility and options of a traditional hood

The Protector Echo is also unique among filtered fume hoods because it is built on Labconco’s traditional fume hood platform, so it will offer a comfortable workspace for users who are accustomed to the space and utility of a standard ducted fume hood. “We will be the only U.S. manufacturer to offer the option of a fiberglass liner as well as the 360-degree windowed enclosure,” Mettlach says. “Its design will even allow it to be fitted with fixtures and power receptacles like standard fume hoods. Plans may eventually lead to a floor-mounted version of the new filtered fume hood as well.” 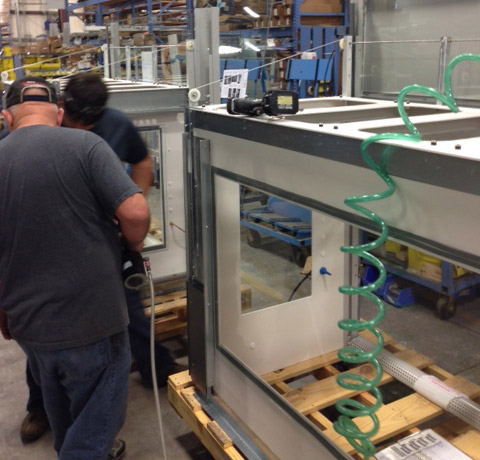 In most cases, the cost of the filtered hood and replacement filters will be less than the cost of a traditional hood along with the infrastructure and energy needed to support it. The price of equipment and the cost of installation for the ductwork, the exhaust system on the roof of the building, and the supply air system to support a traditional fume hood easily outweigh the price of an energy efficient Protector® Echo™ Fume Hood. In addition, the savings afforded by avoiding exhausting tempered air from the building makes this fume hood ideal for many situations.

It is the perfect solution in several scenarios:

This fume hood requires none of that. It operates without removing tempered air from the laboratory, independent of the building’s exhaust system.

Erlab’s Neutrodine™ filters will be the main filtration component of the Protector Echo Filtered Fume Hood. Neutrodine filters are made of a universal filter medium that handles the jobs of more than six other kinds of carbon filters.

The Protector Echo will be available in 4’, 5’, 6’, and 8’ wide models with an ample 30” interior depth. The hood’s design is credited to its main engineer, Gary Roepke with additional support from Labconco Vice President and Engineer Kevin Gilkison. Roepke recently led his design team through a complete redesign of the entire Protector Fume Hood line over two and a half years, producing hundreds of fume hoods, adding energy efficiency and performance enhancements to every product among Labconco’s fume hood offerings. Their designs created Labconco’s line of High Performance/Low Volume, Energy-efficient Fume Hoods, which “were viewed as nothing short of magical upon their debut,” Mettlach says, adding that Gilkison’s credentials include membership in “NFPA 45, ASHRAE 110 and SEFA, along with more than 35 years of experience designing fume hoods.” Both men can claim decades of experience creating innovative and energy efficient fume hood designs, and hold seats on the ASHRAE Committee and other organizations important to their field.

Labconco and Erlab qualify each potential filtered fume hood purchaser and require each customer to complete a Lifetime Payback Questionnaire (LPQ). This ensures that the Protector Echo Filtered Fume Hood is the best choice for their defined application. It will be available for purchase by the end of 2014.