Recently, changes were made to the ASHRAE 110 standard for the first time in twenty years. To best understand them, and why they matter, you must first understand what ASHRAE is.

ASHRAE, the American Society of Heating, Refrigerating and Air-Conditioning Engineers, describes itself as “a global society dedicated to advancing human well-being through sustainable technology for the built environment.” This includes building systems, energy efficiency, indoor air quality and sustainability and covers everything from residential and personal vehicle HVAC systems to those in commercial airplanes and, of course, scientific laboratories. Its history dates back to 1894, making it trusted as one of the premier sources for standards, operating practices, research and more within the industry. 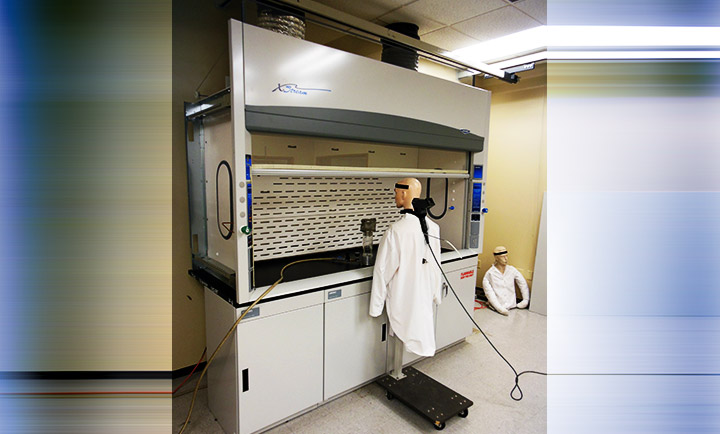 One of ASHRAE’s main purposes is to create and publish standards for testing and performance criteria regarding the design and maintenance of indoor environments. Their standards create defined minimum values for accepted performance of a variety of ventilation-related products.

ASHRAE Standard 110, or simply ASHRAE 110, explains a method for testing the performance of laboratory fume hoods. Essentially, it outlines a quantitative test procedure for determining the operating capabilities, such as containing and exhausting fumes, of a fume hood. The ASHRAE performance test does not, however, directly correlate to safety of the hood operator. This is due to the large number of variables in hood environment (e.g. cross drafts, hood location or temperature), hood use, and materials in the hood.

ASHRAE 110 has become the standard for testing fume hood containment since its inception in 1985. It is used not only by manufacturers during development and design, but also as an informal criteria for purchasing a fume hood for many labs, and as a method of performance evaluation and certification for fume hoods being installed. It can even be used as a diagnostic tool to identify problems in an existing fume hood/HVAC system installation.

The smoke visualization test has procedures for both small volumes and large volumes of smoke to clearly see how the air moves and is contained within the hood. In addition to airflow patterns, the smoke test shows turbulence at the front of the hood caused by the room environment. It can also show how conaminants could escape from the hood, if it is leaking, and reach the operator at various sash heights.

The tracer gas containment testing determines exposure levels based on how many contaminated particles are able to escape the hood and reach the operator's breathing zone. This procedure involves three “static” tests, sash movement effect measurement test, and a perimeter scan. The latter two are optional.

The static placements are three set locations for the ejector, directly in the center of the work surface and 12” in from each side toward the center of the hood. Sulfur hexafluoride (SF6) gas is put into the hood through the ejector and then gas analyzers on a mannequin placed at the average height of an operator’s face, known as the “breathing zone,” measure the amount of SF6 in five minute intervals to determine the average escape amount. Three of these tests are done. Each one lasts five minutes and uses four liters per minute of SF6. ASHRAE suggests measuring concentration to 0.01 parts per million (ppm). Labconco uses analyzers that measure to 0.000 ppm for precise understanding of the hood’s containment capability.

The use of SF6 is important due to its uniqueness. Since it is not commonly found in labs, it’s not likely for the sensor to detect it from the environment. Furthermore, it is five times heavier than air so it’s very clearly the gas from the hood during the test. It also behaves consistently so the same test can be run multiple times to reliably get the same result. These unique attributes help to avoid false readings during the test.

There are three test types, As Manufactured (AM), As Installed (AI) and As Used (AU). AM is done once the hood is built and is generally done in a testing lab where environmental factors are removed as much as possible. AI testing is done once the hood is installed in the lab but before anything is placed inside. This can reveal issues related to how the hood was installed, room operation/location, and other room environment factors. Finally, AU testing is done in the lab with materials (beakers, equipment, etc.) inside the hood. This test takes into account both the room environment and users, and can determine if there is an issue with how it is being operated by comparing the test results to the AI results.

ASHRAE’s goal is for health and safety officers, lab managers and lab technicians to understand the operation of the hood and the safety of it. ASHRAE will not, however, provide a recommendation for the test results. Each lab sets its own acceptable levels for the test results. In addition, some organizations, such as the Scientific Equipment and Furniture Association (SEFA) provide ratings for acceptable concentration levels of each test. For example, SEFA requires a hood to have an average containment loss of 0.05 ppm or less when tested at four liters per minute of tracer gas used in the AM test, and an average of 0.10 ppm or less for the AI and AU tests, in order to receive the SEFA designation of a low velocity/high performance fume hood.

An updated ASHRAE 110 was approved in April 2016, replacing the previous version from 1995. The latest version includes changes regarding the mannequin height and data collection. The test procedure itself was modified based on committee experience and to clarify statements from the 1995 edition, such as the breathing zone height.

Labconco’s very own Kevin Gilkison, Vice President of Sales Engineering, is one of the co-writers of the standard. He explained the major changes of this update.

The location of the breathing zone was lowered to 22” from the work surface. This was based on research suggesting that the average height of fume hood operators has decreased over the past decade. Gilkison shared this change is particularly important because it creates a more accurate test and therefore can lead to a safer work environment for the operator.

Another key component of the update is that it requires digital collection of data during testing procedures rather than manual data collection. This was previously recommended, but not required. According to Gilkison, this reduces the chance of human error in recording this data. The information-based sections were also significantly lengthened, including expansion of Appendix A and a new, non-mandatory Appendix B that provides guidance on investigating poor fume hood performance.

For more information on ASHRAE 110 or how Labconco’s fume hoods perform on the test, contact us.