High performance fume hoods take on many different names throughout the industry, and therefore the meaning of the term High Performance Fume Hood is often misunderstood. With all the various definitions and industry lingo, the terminology can be tricky.

This article will set things straight by clearly explaining everything related to fume hood efficiency, from terminology, to what factors allow a fume hood to proudly wear the High Performance label.

Your Air’s Relationship with Fume Hoods 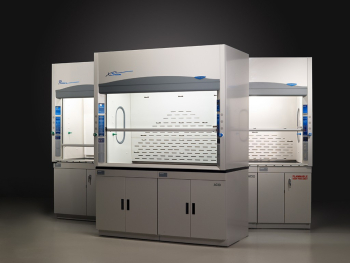 When fume hoods are “on” and operating, air is pulled through them via a blower, creating a negatively pressurized environment to protect the user from harmful vapors. The air travels at a certain speed or velocity. The velocity of a fume hood is measured in the plane of the sash, and referred to as the face velocity, measured in feet per minute (fpm). This term is very important since standards reference face velocities at which fume hoods may be operated.

The face velocity is related to the amount of air being pulled through the fume hood, or the volumetric rate. This number is typically measured in cubic feet per minute (CFM). The more air that is pulled through a fume hood’s openings, the faster the air will travel.

Most of us can relate this to our experience of using a garden hose to water the lawn. If an area is out of range of the garden hose, you can place your thumb over the opening of the hose to make the water spray farther. When you block a portion of the opening, you speed up the water’s velocity, though the volume of water being pumped through the hose remains the same.

Since water and air are considered fluids, the same physics apply to both. The face velocity (fpm) is dependent upon both the amount of air going through the hood (CFM) and the size of the opening the air passes through. 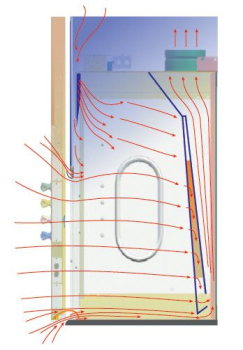 Different fume hood models can operate at different published face velocities. These differences may be based on the complexity of various design elements of the hood. Since not all laboratories need the most advanced fume hoods, many manufacturers offer a range from which to choose. This makes it all the more important to

select the right hood for your application and operate it at the appropriate face velocity; you wouldn’t want to operate a standard hood at a face velocity it wasn’t designed for.

Specific face velocities are chosen based on several variables. The recommended face velocity is dictated by the safety officer of the laboratory or a local code. It is not dictated by the fume hood manufacturer. A safety officer may say it is acceptable to use a fume hood at 60 fpm with the sash at an 18” working height, or she may say that due to drafty lab conditions and an exceptionally corrosive process, she requires the face velocity to be 100 fpm with the sash “fully open” (a 28” opening on a typical Labconco Protector Hood). Keep in mind the sash position is important to specify because its position changes the open area of the fume hood—just like your thumb over the end of the garden hose! The reason this number should be carefully scrutinized is that the amount of air you exhaust from a lab depends on the amount of air with which you supply it, and this directly affects energy savings!

Fume hoods cause an incredible strain on energy in a laboratory. They take expensive, tempered air and throw it outside—much like having a window open year-round and forcefully blowing air out of it. So if a lower face velocity can be used then it should be used! A lower face velocity means a lower volumetric flow and that means energy conservation and also savings to the bottom line—it’s a win-win!

Fume hoods have multiple ways of obtaining a lower face velocity utilizing other types of mechanical systems and fume hood accessories; however, for the purpose of this article, assume a constant volume fume hood with one face velocity set point. If you would like to discuss those other options, please contact Labconco.

Velocity Does Not Equal Safety

Prescriptions range widely for required face velocities, so to set the record straight, it has been proven that faster is not necessarily safer! In fact, many laboratory standards specifically state that operating at high velocities (above 150 fpm) can actually create a safety risk and health hazard due to turbulent air.

If a laboratory is balanced and follows general guidelines for operating a constant volume fume hood, a significant amount of energy may be saved if the fume hood can operate lower than 100 fpm face velocity.

Another reason to analyze the face velocity is that you must supply enough air to your lab to allow the fume hood to exhaust at its set volume. Otherwise the fume hood will create a vacuum within the laboratory. It would therefore draw air improperly from anywhere it possibly could and may not function correctly.

Let’s compare this phenomenon to liquid again. If you’ve ever tried to sip a beverage through a broken drinking straw, you know that a cracked straw will draw air into your mouth instead of your delicious beverage. In the same way, unless you supply enough air to the laboratory for a fume hood to expel, it will borrow air from any other space that is less than perfectly air-tight. That means that the fume hood’s containment ability would be compromised just like your straw’s ability to deliver tasty refreshment to your waiting lips.

A lab can be starved of air. And if it is, the fume hood will not exhaust properly and the user’s safety will be at risk. So taking all variables into consideration, be sure your HVAC system provides enough air to the lab before adding fume hoods or choosing face velocity set points. That is not to say all labs can operate their fume hoods at as low as 60 fpm to relieve the strain on their HVAC systems, of course, since other criteria such as applications must be factored into the specification.

Fume hood face velocity should be analyzed and carefully specified because there are many benefits to operating at a lower face velocity, and higher face velocities cause their share of risks and unnecessary costs.

The Many Definitions of High Performance

High Performance fume hoods are subjected to many marketing spins, and therefore different names are thrown around in an attempt to attract customers. At the end of the day, if a fume hood is referred to as a Low Velocity, High Efficiency, Energy Efficient, or Low Exhaust Volume, it all boils down to the same thing: Some form of the moniker “High Performance.”

The Scientific Equipment and Furniture Association (SEFA) has set a minimum standard for High Efficiency which any fume hood making one of the aforementioned claims should meet or exceed. According to SEFA, a High Efficiency Fume Hood must pass the testing requirements described below.

High Performance and the ASHRAE 110 Test

Per SEFA, the definition of an Energy Efficient fume hood is as follows:

Low Velocity Laboratory Fume Hoods are hood designs that provide a reduction in the required exhaust air volume, when compared to the volume required for the same size fume hood to operate with a face velocity of 100 FPM through a fully opened vertical sash and provides containment levels equivalent or superior to ASHRAE 110 tracer gas test ratings of 4.0 AM 0.05, and 4.0 AI/AU 0.10, with a face velocity of 60 FPM or less through the fully opened vertical sash. Low Velocity Fume Hoods are also referred to as High Performance Fume Hoods and High Efficiency Fume Hoods.[1]

As you can see, several of the terms for this definition have worked their way into the definition itself to provide greater clarity.

The ASHRAE 110 test is a three-part test to check the performance of a laboratory fume hood. This test is comprised of a perimeter scan of the face velocity, a smoke visualization test, and a containment test using Sulfur Hexafluoride (SF6) tracer gas and a manikin with a sensor to mimic someone working at the hood.

The rating described above as “4.0 AI/AU 0.10” refers to a release rate of 4 liters per minute, in an As Installed or As Used state – hence the AI or AU, and the acceptable amount of SF6 detected by the sensor in the manikin shall be no greater than an average of 0.10 parts per million (ppm). The reason the test allows a greater amount of SF6 in the AI or AU test is due to the fact that during the AM test, there is no equipment in the fume hood, and it is tested typically in a controlled test lab as a brand new hood. The AI and AU tests incorporate real lab environments that may contain cross drafts, equipment inside the hood, and suboptimal supply air conditions.

Then What is a High Performance Fume Hood, Really?

Historically, most fume hoods were operated at a face velocity of 100 fpm with the sash fully open. That would be full speed for most fume hoods today, and would constitute an unnecessary energy drain in most laboratories. While there is no magic number for fume hood face velocity in every lab, standards do state a specific range. And the reason standards are so vague about dictating a specific face velocity is because 100 fpm on an older style basic hood is vastly different from 100 fpm in some newer hoods. Furthermore, those hoods will differ from lab to lab depending on the air balance scenario and real life conditions. All of these things need to be considered when planning a lab to ensure the best energy savings from the hood, while still maintaining absolute safety.

It is important to ask manufacturers for test reports and question (and recognize) unclear claims. Although test reports may state results at 40 or 50 fpm face velocity—the minimum recommended by standards is still 60 fpm. Lower velocity test reports are intended to provide peace of mind. They show that an additional safety factor is built in to the fume hood design, even though no standard recommends operation below 60 fpm.

The thought process would be, “If this fume hood contains successfully at the extremely low face velocity of 40 fpm, then it will surely contain harmful fumes exceptionally well at 60 fpm.”

When operating laboratory fume hoods with a constant volume system and lower face velocity set points, energy savings can really add up—some High Performance Fume Hoods can even pay for themselves in energy savings in a very short time. Ask the manufacturer to help you zero in on annual savings and return on investment for your specific installation.

Since many variables can affect fume hood performance, size your fume hood for the face velocity dictated by your safety officer or applicable local code. Use the manufacturer’s published performance information to determine an acceptable operating range for the fume hood, and ask for test reports to back up that performance data.

Remember, an advertisement showing a hood can be operated at 60 fpm does not necessarily mean that it is a High Performance fume hood; it may only be able to operate with the sash lowered at that velocity, and therefore it is not truly High Performance. Some fume hood manufacturers provide a diverse selection of fume hoods to fit a wide range of needs, so be sure to choose the one that is right for your application.

If you ever have a question about whether a fume hood is the right fit for you, be sure to contact our fume hood experts.