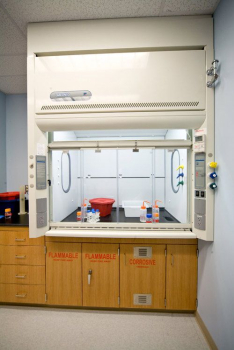 Ductwork comes with the territory when purchasing a typical ducted fume hood. Designers sometimes choose to cover the duct with panels called ceiling enclosures. These panels make the fume hood appear as if the top of the fume hood goes all the way to the ceiling, essentially covering the duct work (see image at right).

SOLUTION:  Find another source of supply air for the negative ceiling pressure by removing ceiling tiles, or creating a vent elsewhere.

Return to the main article, "3 reasons your fume hood isn't working as it should".