UV light alone isn't enough to kill all of the microorganisms in your lab water, according to a study published in Environmental Science & Technology. But you can still purify your water with the right equipment.

Microscopic organisms were first observed over three hundred years ago in the mid-1600's. From those early days we understood that microorganisms represent a major group of water contaminants.

These groups are often used for the purpose of engineering specific mechanical or chemical systems which will remove these contaminants from water.

Microorganisms include bacteria and exist in most all natural water supplies. While municipal water treatment plants go to great lengths to remove and control bacteria in our tap water supplies, the finished product and the way we use it should never be considered sterile. 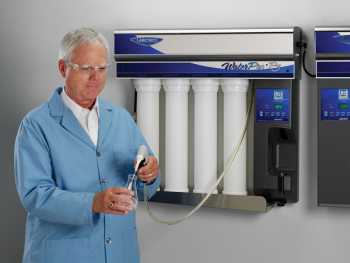 Even if the water in our faucets was sterile, bacteria would easily re-enter unprotected water distribution and filtration systems through line breaks, bad valves and poor lab techniques, such as dropping the pure water delivery tubes into the dirty sink.

However keeping water sterile is quite often a much more complicated problem. In most situations it is simply easier to remove bacteria from the purification systems just prior to actually dispensing the water for use. This is accomplished by using a disposable 0.2 absolute micron filter.

These filters can sterilize the final water output and are placed at the very end of the dispensing tubing system in many purification devices. Once the water exits the filter it becomes the responsibility of the laboratory operator to ensure that sterile water remains sterile.